Uncertainty in an Uncertain Time

Christina Romer, late of the President's Council of Economic Advisers and a prominent Macroeconomist (married to another one by the way), has a piece in Sunday's NY Times on the challenge of uncertainty in the economy. She starts by debunking the myth that the current debate over the tax rates is stopping businesses from spending and investing.

"This is a serious misreading of the situation. Uncertainty is likely holding back the recovery. But its sources are far more fundamental than the tax and environmental issues that typically top the list of complaints. And the solution is certainly not for the government to do less. Rather, it needs to do much more."

But after this promising start she falls into the trap of blaiming the long run deficit for the problem of uncertainty. Her solution is wise to the extent that it recognizes the need to enact the deficit reduction measures once full employment is achieved. Until that time, she commits us to fight unemployment as FDR pledged, as if it was serious as war.

"They should follow up with powerful fiscal and monetary actions to create jobs — coupled with a concrete plan for tackling our long-run budget problems. We are at a critical moment. With many in Congress opposed to further jobs measures and tax increases of any kind, the chances of prolonged gridlock are high."

By why grant the point about the long run deficit in the first place? Why not rearrange the essay to start with the stronger point that undertainty over the economic prospects of the future, primarily as a result of historically high unemployment rates, is stagnating consumer demand and making businesses cautious about investing. 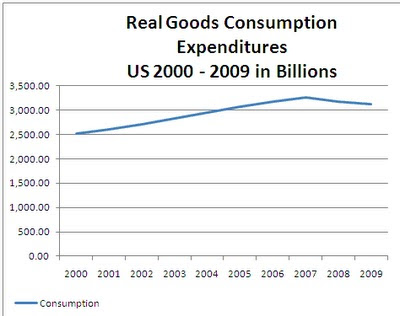 The numbers are for goods consumption and show a flat line for nearly half a decade. With consumers not spending money, what business person would be willing to risk capital on expansion﻿ of facilities. The problem of uncertainty is based on consumer demand, not deficits. Romer is correct that government needs to take further action to reduce uncertainty; but as the Chair of the Federal Reserve has begged; Congress and the President must use fiscal policy to get the economy moving again. As consumers feel secure in their jobs and their prospects for the future they will drive consumption and growth. By granting the argument that deficits are an immediate problem (even if the solutions do not need to kick-in for a few years), we are just confusing the issue of uncertainty and reducing the power of the Macroeconomic argument for action.
Posted by Ben at 12:27 AM