The Bureau of Labor Statistics is out with its snapshot of the employment picture in November, and the news is not good. While overall employment rose by 39,000, that is a small number compared with ongoing growth in the labor force. The economy needs to be creating jobs in the hundreds of thousands a month for there to be significant reductions in unemployment. During the 1990's we generated 2.9 million in 1993 and 500 K in 1005 and 3.1 million in 1996. But in those days the labor force participation rate (number of people in labor force/noninstitutionalized adults and a good indication of people's confidence in the labor market) was hovering around 62 to 63 % and today it stands at about 58%.

The most watched unemployment rate edged up to 9.8% based on the November numbers. The numbers are from two different surveys conducted by the BLS; one is a household survey which results in the rate; the other an establishment survey which results in the nominal job figures. The one (very dim) bright spot is that private employment increased a bit faster than the overall. It was government employment that drove down the numbers. In fact government at all levels has shed about 135K jobs over the last three months.

So my tip for watching out for the economic hypocrisy of the day? Watch the public officials blaming the Obama Administration for failed policies as they encourage government austerity measures that will make the situation worse. From the excellent work at Calculated Risk. 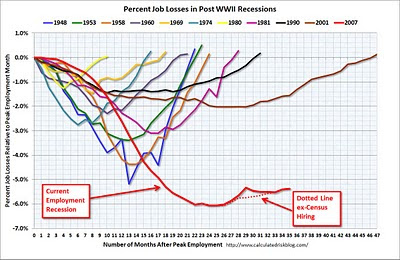 This indicates the slow growth in employment since the "end" of the recession.﻿
Posted by Ben at 1:28 PM