The BIS Paper on Borrowing and Leverage in OIl

The Bank for International Settlements, the international banking consortium, has done a study of instability in the oil price regime. They find that the drop in prices is not solely related to changes in production and consumption; but rather due to leveraged hedging by producers and the middlemen. Sound familiar? The same tactics that infected the housing market last decade are now at work devaluing oil assets.
Posted by Ben at 6:58 PM No comments:

Not the Time to Raise Interest Rates

The January 2015 Unemployment report was released today and it shows continued growth in the number of Americans with jobs. In fact, as the graphic shows we are up almost two million positions from the point of highest employment prior to the recession. This is due to the increase in the activity in the private sector which has experienced some measure of growth for over fifty straight months. Parenthetically, public sector job growth is a NEGATIVE 600,000 over the same period. The government has been implementing restrictive fiscal policy and despite this the economy has seen some growth, though less than we would typically expect coming out of a deep recession. The challenge is that we are barely keeping up with the growth in potential GDP, and haven't made significant progress closing the GDP created by the economic crisis. The positive actor has been the Federal Reserve which has kept interest rates low and for a few years took extraordinary measures to provide liquidity to the economy, keep interest rates grow and to try something to generate growth. 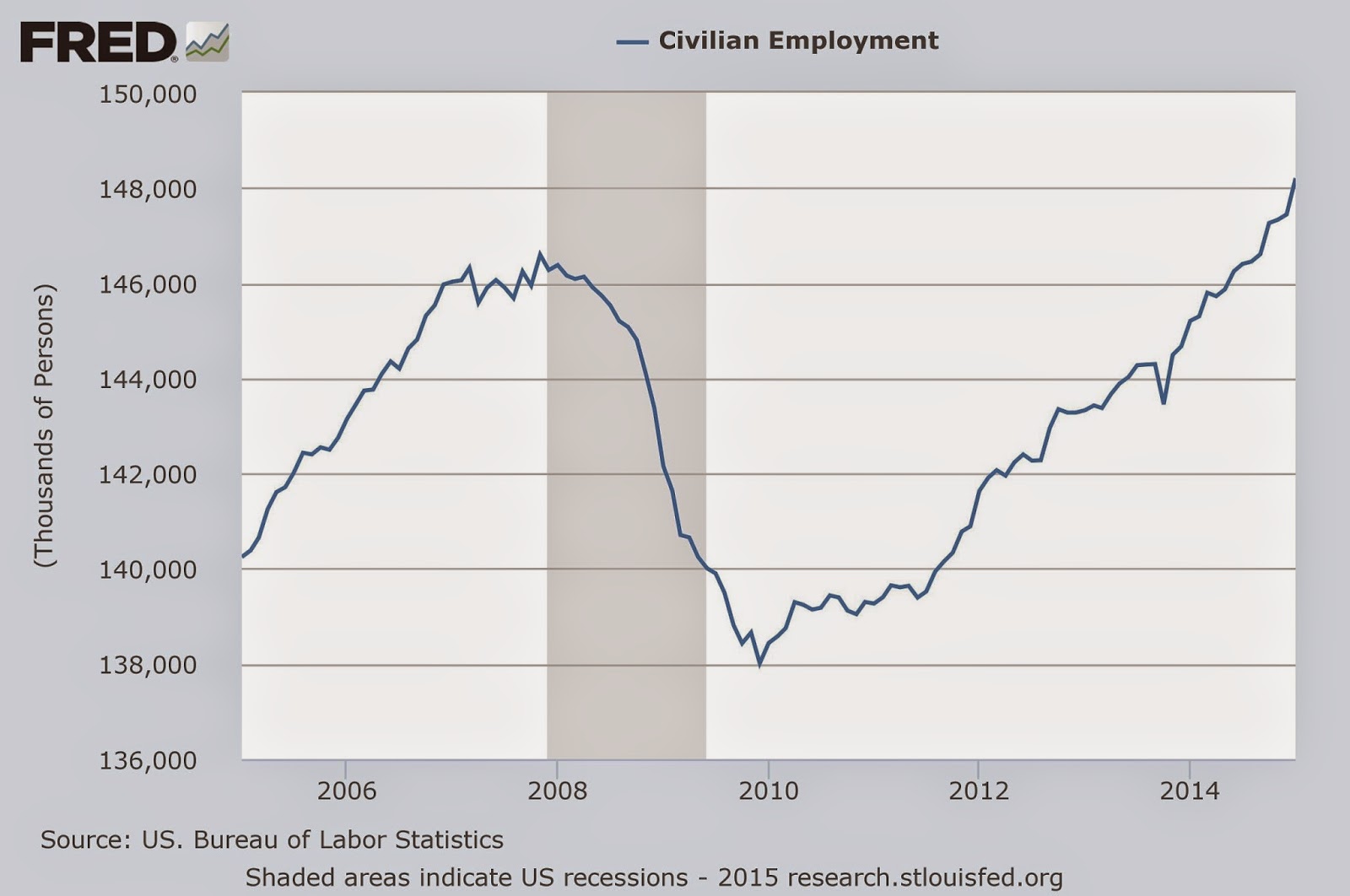 Despite this weakness there is discussion of having the Federal Reserve start to raise interest rates from the zero lower bound and the justification is the normal nonsense about preventing inflation (which is non-existent). But there are other economic headwinds that will be made only worse if US interest rates rise. In the last few months the US Dollar has strengthened against most foreign currencies. Against the Euro alone there has been a shift of about 20% in the favor of the dollar. This trend has deepened because of monetary policies taken abroad which have lowered interest rates or injected liquidity in Europe, Asia and Latin America. The US Dollar has gone from near parity to a 25% premium over the Canadian Dollar during this period.

Not surprisingly, we have already seen the inevitable result of this movement. Growing trade deficits. The US runs persistent current account deficits and if the dollar does not drop in value against foreign currencies those deficits will continue and under current trends … deepen. Having the Federal Reserve raise rates will only make this problem worse. When the currency strengthens against others it worsens our trade position (it makes foreign goods and services less expensive relative to our own) depressing exports and increasing imports. A widening traded deficit means that more income from the US is shifting overseas making it less likely that we will achieve the recovery we need from the crisis of 2007-2009. The Federal reserve should postpone any action that will cause the rebound in private sector employment to abate.
Posted by Ben at 6:41 AM No comments: