How the Iowa Caucus is like Major League Baseball

Institutional arrangements matter and in turn they help us predict and understand outcomes of policy and elections. In the case of the upcoming Iowa caucus those rules vary between the parties and one must wonder if those important differences are too complex for the accompanying media narrative. So like Major League Baseball the two parties/leagues have different rules (thinking designated hitter here).

In Iowa on the democratic side the caucus is a caucus. Participants gather and listen to people give brief talks on behalf of the various candidates and then huddle in corners for their respective candidates. The goal is to elect delegates to a county caucus as the first step in the process of selecting national convention delegates, a process that won't be completed for several months. All indications are that the number of people attending the caucus will be pretty evenly split between Sanders and Clinton with almost nobody caucusing for former Governor O'Malley. This is critical as to have a viable group to elect a delegate(s) to the county convention you must have at least 15% of the attendees of your precinct in your group. As O'Malley is polling at less than 5% he will have very few precincts where his supporters make a group above the threshold. In a close race it could be determinant as to where his supporters go ... Of course there is the option of going home or being in a larger uncommitted group. But there are always rumors of deals among the campaigns ... Say like if you support Sanders to help him win the precinct his supporters will elect your folks to the county convention.

The fascinating question is always which set of numbers will the press use to create the narrative? Is it caucus goers when they huddle or the results of delegate elections? Here are figures from The New York Times in 2008 where the results were results as state convention equivalents. This style of reporting basically eliminates less popular candidates. (The candidates not Obama, Edwards or Clinton split 3.1%.)

On the Republican side the caucus has an additional step. When caucus goers arrive they participate in a straw poll which allows them to indicate their first choice preference.In the same Times link they were indicated for the Republicans. Note for example, eventual nominee John McCain came in fourth with 13.1%. If the results were reported based on state delegate equivalents elected (like in the Democratic race) then McCain would have faired worse as he might have not been viable in half the locations. Would that weak of a showing enabled McCain to win the New Hampshire primary shortly thereafter?

These rules have an impact on tactics, spin and reporting. In the end one must remember that the Iowa event is not an election it is by design a gathering of the hard core party faithful, a party possibly crashed by newly enthusiastic "outsiders". The final Des Moines Register poll is out and the trend continues as described above. Trump leading Cruz for the R's and Clinton with a slight lead over Sanders for the D's.
Posted by Ben at 6:27 AM 30 comments:

It was announced today that General Electric picked Boston as the site for a new corporate headquarters fleeing its long time base in Fairfield County, CT. While the final site has not been picked it looks like there are two contenders in the Seaport District of Boston. So the irony is that they probably picked the only other spot in New England where property values are as high as Fairfield County. So it is not surprising that along with the announcement came word that the City of Boston and Commonwealth of Massachusetts are promising tax incentives of up to $150 Million dollars over some period of time (probably 20 years) to sweeten the pot. 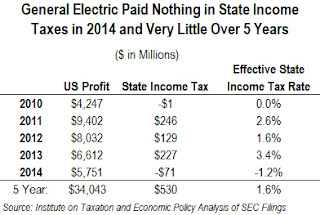 graphic from Citizens for Tax Justice


Keep in mind that this is the same GE, one of the largest firms by market value in the US, which had over $90 Billion in cash at the end of 2014. And now they must get millions of dollars per year to relocate to one of the hottest commercial and residential neighborhoods in North America. There is no way that these incentives will ever be worth the money payed out to this firm. While Boston is chronically underfunding its schools and Massachusetts is looking at a billion dollar hole for next year's budget it might make more sense for GE to be giving money to the government. The only hope is that since GE doesn't really deign to pay state taxes anyway so that the incentives which are based on state income taxes won't ever be used. That leaves Boston holding the bag for the property taxes forgiven as part of the horrendous TIF.

As I will have a longer piece coming soon to this point I won't belabor it here but these incentives are most effective at making politicians look good in the face of weak coordination of job and workforce development efforts. Smiling and holding a big pair of scissors is good for big votes. It is not good for public finances or public policy.
Posted by Ben at 4:40 PM No comments: