A great question came from a reader about the difference between the various measures of unemployment (yes there are several). Here is a good explanation from Portal 7:

So U6 is the broadest measure of unemployment and inclides "marginally attached" workers, in other words folks who have ceased looking for work due to futility and there fore are not in U3 which is the widely reported "unemployment rate". 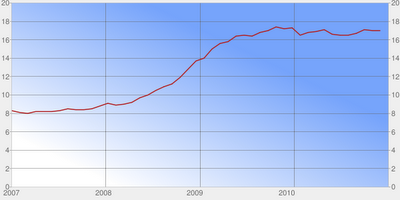 As you can see the U6 is significantly higher than U3. The monthly numbers are available at the Bureau of Labor Statistics.
Posted by Ben at 11:21 AM