Devil in a Blue Wig

Yesterday the NY Times reported this story about models hired to attract donors to the Bone Marrow Registry. Today the Boston Globe added more details about the subsidiary of UMass Medical Center which hired a modelling agency to staff tables in area malls in order to generate interest. The models according to the Globe "wore short skirts, high heels, and sometimes sported neon blue wigs to recruit bone marrow donors at malls in Massachusetts and New Hampshire, and games, and flower shows."

The story raises two issues, whether donors lured into signing forms by attractive models really have a commitment to go through with surgical procedures to remove marrow to help an unknown cancer patient and second why the health insurance provider of the potential donors were charged so much for the testing that was part of the application. The Globe mentions that concerns have been raised about the charges by health insurance companies that have been charged up to $4300 per person for tests.

And we wonder why health care costs increase so much in the US. 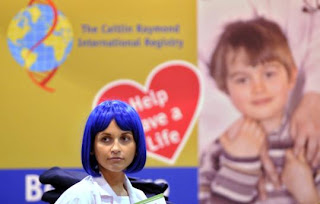 photo from the Boston Globe
Posted by Ben at 5:58 PM