Dean Baker at the Center for Economic and Policy Research has a useful blog called Beat the Press; where he takes the media to task for economically unsound writing. His frequent target is the Washington Post and the tendency of Post economic writers to editorialize through what is supposed to be news reporting. I found an example of this in a NY Times article from Thursday titled "Euro Zone Is Imperiled by North-South Divide".

There are a surprising number of editorial comments and mistakes in the section that is published on the front page.

1. The article tries to create a Northern Europe - Southern Europe divide. Outside of the fact that the differences in income between Germany/France and Spain/Portugal have existed for generations, the reporter is challenged on geography too as he insists on including Ireland in his model for Southern Europe. As I ask my European Politics students ... why did Germany/France create European Integration with the Treaty of Paris in the 1950's and Spain/Portugal not until the 1980's? Spain/Portugal were dictatorships until the mid-1970's and the rule has been to bring nations into "Europe" once they were stable democracies. The years of dictatorship cost the nations dearly.

2. According to the article a Portugese business person laments the Euro for making their products less competitive in world markets compared to textiles from Poland (an EU country not in the Euro Zone). However, according to the CIA stats comparing income per capita, Portugal has 50% higher GDP per capita in 2009 than Poland. It makes higher costs then perfectly understandable...a higher standard of living is going to make export products marginally more expensive. This section illustrates the danger of getting macroeconomic expertise from someone who is a really good sales manager.

3. The theme then becomes that Portugal would otherwise devalue their currency to make their products more competitive, except they have tied themselves to the Euro. The reporter ignores the fact that 72% of Portugese trade is with EU nations, and one of the many reasons they have a common currency is so that terms of trade can not be disrupted by unilateral devaluations.

4. Perhaps the worst section is the painful construct the reporter tries to create that the two countries receiving assistance form the IMP and EU namely Greece and Ireland are peas in the same pod. The truth could not be further from this contention. In fact Ireland aggressively pursued the remedies advocated by the article in paragraphs 6 - 10. The lowered taxes, reformed labor markets and had growth...that wound up being largely the same asset bubbles that other economies suffered and have brought it to depression era conditions. Ireland let its banks run wild and now it was to cover their losses. Greece had financial mismanagement from its former government (friends of Goldman Sachs) which combined with recession in 2009 (milder than the US) and structural problems (large underground economy) results in debt.

5. In the back page continuation, the article does quote some economists (Roubini - is there a Roubini bubble now that he predicted the other bubbles?) as opposed to business people who may be confusing cause and effect. But even then, they disparage the capability of governments to adjust fiscal policies because of (horror) political considerations. Basically the reporter is saying that the four Portugese businesspeople should outweigh the voters as they make the determination of how much to spend/tax to support their public sector. 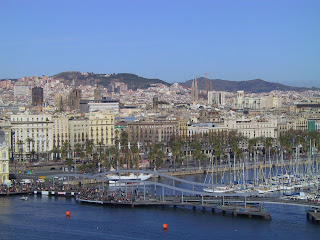 Barcelona Spain
Posted by Ben at 10:24 AM