When I moved to New York City in 1979 I read a report from the Port Authority of New York/New Jersey on highway maintenance/replacement in the area. At that time the City and State of New York was just emerging from the final crisis so they had been underinvesting in many things. What has stayed with me to this day is the statistic that at the rate they were doing maintenance and replacement they would reconstruct their highways once every thousand years. That's right, it would take them a millenium to replace their highway system. New York City was turning into a giant pothole.

What brought this to mind was this post from Mike Mandel regarding the decline in public infrastructure investment since 1969. In general it looks bad for the US; but the worst performance is in the public investment. 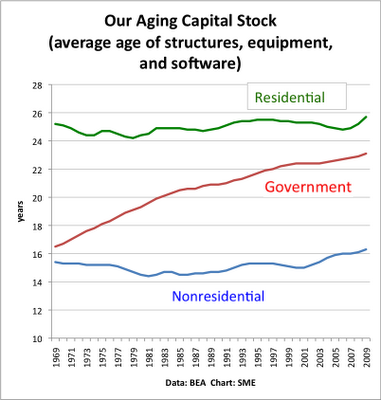 So the scary thought is that overall, the infrastructure has gotten worse since that report from the Port Authority many years ago.﻿
Posted by Ben at 4:27 PM