The NYTimes and Math

My internet friend Dean Baker (whose blog is a daily breakfast treat) was a bit busy to take on this whopper from Thursday's NYTimes on economic growth. Apparently the reporter was bound and determined to show that growth in the advanced countries (US, Europe and Japan) was taking over the BRIC's as an engine of worldwide economic growth. After telling us that the EU posted a 1.2% annual growth rate for the second quarter over the first, Nathaniel Popper claimed that economic acceleration is coming from the "old world".

Perhaps the most invidious aspect of the article was the info graphic here which shifted to nominal dollar figures to compare the four BRIC countries against the US, the 27 European Union Countries and Japan. Outside of comparing 29 countries (with larger economies) with 4 (with larger populations) and the fact that the graphic still showed the 4 with nominal increases greater than than the 27, and ignoring whatever index they use for the various currencies, they then slip in a pretty picture about relative stock market performance. Apparently they didn't read any of the many articles in the NYTimes about the huge injections of liquidity into the economies of Japan and the US, and to a lesser extent Europe, which have helped propel the stock markets to new highs. The BRIC's haven't been participating in the same manner. In fact, what they have showed is that stock market performance looks to be a function of central bank activity (that would be an interesting article). 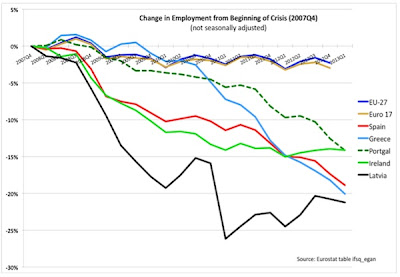 Now the reporter might be forgiven for all of this if he wasn't very adept at simple excel formulas where he could have compared the relative sizes of the US and China economies and their growth over the past year. Basically China and 7% is bigger than the US and 1.4%, even given that the US economy is a bit bigger than that of China. The punch line of course is the press release from the EU indicating that year over year growth for the EU was a NEGATIVE 1.4%. They will not be much help to the global economy until they get off the austerity kick which has decimated the economies of Spain, Portugal, Greece, Ireland, Latvia, Cyprus, Italy, etc... Need more proof, check out the shrinking workforce in these countries, here. I get that the newspaper business is a bit stretched these days which is why we have seen such rapid changes in ownership, but I would hope the NYTimes could invest in some editors that could force their reporters to do some basic math.