This summer we went to the brink on the student loan bill and the Congress eventually passed a version that had overwhelming support. The President signed the bill into law and said, "our job is not done". The President is correct because due to the self imposed constraints on the discussion, the result is a bill which potentially leaves higher education in significant financial straits. The goal for reasons unknown, was to allow college loan rates to fluctuate with the market. Apparently members of Congress and the President think there is a market for interest rates. The public justification was this would get "politics" out of setting the rates, apparently Congress couldn't be trusted to balance the concerns of affordability of education, "costs" and interest rates. 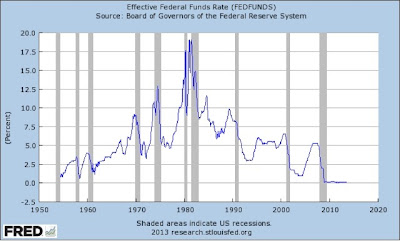 Since 2007 Congress had fixed interest rates which reached a level on Stafford loans at 3.4% for undergrad and 6.8% for graduate loans. We will skip the obvious question as to why there is a surcharge for graduate students (obviously causing bigger interest costs hopefully offset by higher lifetime earnings, unless you are a public school teacher who is required to take the classes and pay the money). As you can see from the following graphic, interest rates in recent years have been very low as a result of extraordinary efforts by the Federal Reserve to keep the economic implosion from getting worse. So the federal government   has been taking in more money than they have been lending as a result of the fact that the Feds can borrow at far less than the rates charged to students.

One important constraint is the justification for the surcharge in the form of a claim of high collection costs for student loans. The theory goes that because there is a default rate for student loans there should be a recovery in the form of higher rates for all borrowers? Why should a diligent repayer have to shoulder the burden of a higher cost because a small number of students default? How is that their fault exactly? In essence the government is increasing the likelihood of default by making students pay higher interest rates as a result of some other students defaulting (many of whom never graduate and never get to benefit from the higher lifetime earnings).

The major issue is the contention that somehow the market sets interest rates. Nothing could be further from the truth. Go back to the graphic which shows the Federal Funds rate over the past six decades. This is the rate set by the Federal Reserve s a result of their open market operations. Notice the large fluctuations? It is because they set the rates in response to the goals of monetary policy. Higher rates, less demand in the economy. So how does the market set 10 year government debt rates? The market determines whether the rate is 2.8% or 2.9%. The Federal Reserve determines whether it is 2.8% or 4%; what does this have to do with a fair rate for student loans?

Since Congress has rarely used fiscal policy in recent decades, monetary policy has become more salient. So why should college student loans be tied to the tool of monetary policy? Wouldn't a more rational policy based on some idea of fairness and the acknowledgement that market mechanisms overprice college loans (the whole reason we have government loans and guarantees in the first place)? If the societal return is such that permanent rates of 3.4% work why not leave them there permanently instead of the possibility of huge fluctuations causing problems for the higher education sector?