The World Economic website which provides economics commentary and research has an interesting piece on youth unemployment. They compare the experiences of Germany and Singapore with that of the rest of the advanced world. They are particularly interested in the variables of education, meaning do the standard western universities prepare students for todays jobs (with the emphasis on ICT) or they based on an outdated model? They find that Germany has much less of a problem of youth unemployment than the rest of Europe (7.9% versus 22.6% in the rest of the EU). Singapore, which wins raves for its efforts to promote innovation, rates highly in their index for Global Competitiveness.

Yet they seem to miss the point. Germany and Singapore have lower unemployment rates in general compared to the EU and most all advanced economies. Why? Is it because of their specific policies related to innovation? Or rather their efforts to promote exports which allow them to run a decided current account surplus. I conclude it is more the latter than the former, and as always it can't be sustainable or rather transferable to other economies. 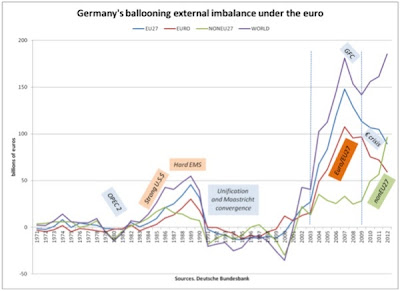 The observation is not unique and has been commented on by other economists such as Krugman. If you want to lower unemployment you need to generate demand. While not everyone can do that through exports (for every surplus dollar in places like Germany, Singapore and China there must be a deficit in the US, Greece, Spain, and elsewhere), everyone can do it through fiscal and monetary policy. Instead of using the "race to the bottom" wage policies advocated by Tse, Esposito, et al which will only displace unemployment from children to parents, why not generate enough demand to increase employment across the board?

Of course doing that implies you end austerity.