Sleeping on the other side of the world

Walking through Vienna in the late evening hours I paused to hear two very talented young women play a classical piece. I mean Berkeley College top of the class talented, just playing on the street. The sound of music in the center of the city made me think of some of the differences between Singapore and Vienna. Two small places with high standards of living, diverse histories, some striking similarities and stark differences. I have been slow to post as this trip has been long and tiring but exciting intellectually. Too much time awake at 4 AM though in very different time zones. 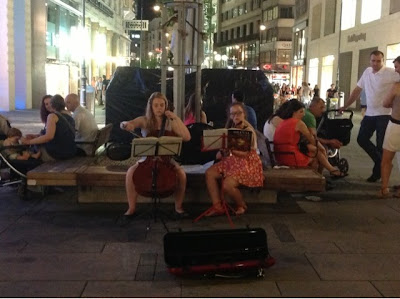 There was no music on the streets in Singapore, nothing but the sounds from the shops and stalls in the crowded quarters such as Chinatown and Little India. In Vienna street music is everywhere. In the morning you can hear the radios as the restaurants are cleaned from the busy night.

Working people are present in Vienna. You see dusty construction workers on the subway, some neighborhood cafes and the trams after their shifts. While in Singapore, I never did see anything similar. The subway in Singapore is immaculate and filled with young people and office workers. In Vienna there are actually signs that life doesn't end at 30. The subway in Vienna is typical of the way it feels in one of our cities. It looks used but is fast and efficient and like a modern city has a good complement in the trams and buses. I didn't use the bus in Singapore but they were present and the transit network is vast. Remember cars are quite expensive there so they need to heavily invest in public transport.

Most importantly, Vienna and Austria have the political pluralism that Singapore has yet to achieve. In the Straits Times there were discussions during my visit about what political pluralism would mean for the city-state. The opposition holds only 6 seats in the unicameral legislature out of 87. They didn't win one seat until 1984. It is not likely that other parties will have a significant impact on Singapore for many years. 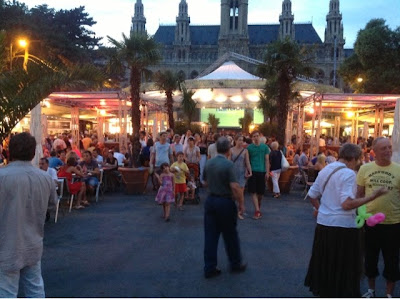 Austria is another case entirely. Like many European countries its politics are divided between the center-left Social Democrats (including the brilliant Mayor of Vienna, Haupl) and the conservative People's Party and the xenophobic Freedom Party. There are Greens and right wing populists that make for a divided parliament but vibrant political life.

Both are prosperous, small and ethnically rather homogenous. Austria is one of the few EU countries where real estate values are higher today than before the crisis (so too Singapore, can you say bubble in German?) But there is no other choice but messy democracy and all that it implies for developing the full rights of humanity. With the noise and dirt comes the violins that sound like weeping into the warm vibrant summer night.