Those who know Singapore know it is a relatively small city-state at the tip of a Malaysian peninsula. Singapore won its independence from Malaysia 48 years ago (after previously getting independence from the UK). It is a relatively new country with new cultural, political and economic foundations. You do not have to spend much time here to see the richness of the multicultural environment.

The Asian influence is strong with a Chinese, Malay, Indonesian and Indian components. I have a Japanese friend here and I am certain there are representatives of other Asian ethnicities here as we'll. There is a Chinatown, Little India and an Arab Street. 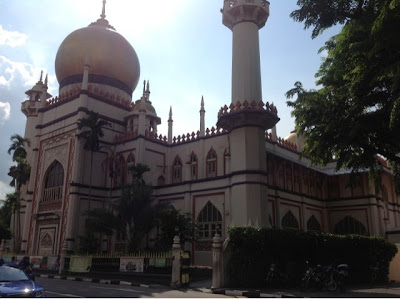 There is the great central mosque, the Sultan Mosque. It anchors the Arab Street area (which is really a quarter). In honor of Ramadan there are special food and shop activities in the latter part of the day near the mosque. Yesterday we met with officials from the Singapore Management University which attracts students from around the world and the director of the institute we visited was an Indian national who has lived here for over 30 years.

And it works. While the political elite is largely of Chinese descent there are significant contributions across the ethnicities. Why does this multiculturalism work? Since Singapore is a small place; 287 square miles and 5.4 million people there is a rational basis for the need to make sure everyone has the capability to make a contribution. Since the birth rate is relatively low, there is a big emphasis on immigration. For example, foreign students are invited into Singaporean universities with subsidized tuitions if they are willing to spend three years working for a Singapore registered company. With this policy they combine the support for human capital development and that of openness to people's from other countries. Typical of many policy choices here, it is rational, there is an incentive, so they do it.

By the way there are many Caucasian visitors and residents here.

Email ThisBlogThis!Share to TwitterShare to FacebookShare to Pinterest
Labels: Singapore