Greece, Democracy and the Way Forward

Writing as of late Monday the situation in Greece continues to grow more stark. The on-again/off-again negotiations between the creditors (The so-called Troika of the IMF, EU and ECB) and the Greek government have made no progress toward a win-win situation. Over the weekend the US was intervening to get the parties to work toward an agreement that involved some debt relief for Greece. The unfortunate timing of the announcement from Puerto Rico that it has a similar problem of unsustainable debt probably sidelines the Obama Administration at this eleventh hour. Tonight the sides are forming on a referendum called by the Greek government for the weekend to see whether the Greek electorate will endorse the next round of austerity imposed from outside the country. 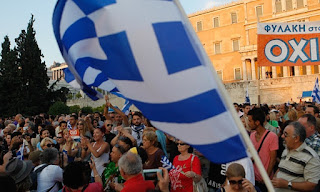 Prominent voices in the US and Europe have called for the people to vote "No". Some like Paul Krugman have warned for years that a single currency zone absent political integration would end in disaster. Joseph Stiglitz also counsels on his approach to the conflict and his rationale for the vote against the next wave of austerity. Two weeks ago Amartya Sen called on the EU to end its austerity regime aimed at Greece saying that the Keynesian formula of spending in the face of contraction (Greek GDP is down 25% since the crisis began four years ago) is the right one and austerity counterproductive. If three Noble Prize winning economists are saying the approach of the Troika are wrong ... who supports their destructive ideas?

As the great summary of the crisis from Social Europe shows, the point of the bailout of the government and the continued assistance to the Greek banks was to help the holders of Greek sovereign debt ... banks in Germany, France and the rest of Europe. Now the Troika largely owns the debt. So what the Troika wants Greece to do is contract the income of their people more in order to generate trade and government surpluses to provide funds to pay off the creditors. The fact of the matter is many of these institutions made poor business decisions and now the Greek people are asked to pay the bill. The Troika wants the Greek government to continue to commit Macro malpractice after a generation of Germany (and other export driven economies) allowing Greece to import significantly more than it exported in order to enrich Germany (and other export driven economies) which expanded the nation's indebtedness. 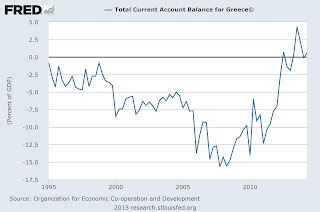 Today Greece has eliminated its current account deficit and so is near to running primary government surpluses. However, this level is not enough to repay the creditors. So what is to be done? The answer is to leave the Euro with all the risk and confusion that will entail. With its own currency Greece can devalue its debts. It is the path that allows Greece to control its future and have some hope of generating economic growth and prosperity. The question becomes to what lengths will Germany, and the other European powers-that-be, go to prevent Greece from charting its own future and self revaluing its debt?
Posted by Ben at 9:33 PM