One hundred years ago the world was in the engulfed in the first of the three great European wars of the 20th Century. Starting in 1914 the First World War reached out of Europe to include Africa and North America in its insane grip. Millions died in the war and its indirect misery and the stage was set for the second and third (Cold) wars where the impact grew across the globe. In the U.S. The milestones seem to flow by with little note. The sad anniversary of the sinking of the ocean liner Lusitania was in May. Perhaps a wreath bobs on the ocean left by someone connected to the event.

Thankfully the British have taken one modest step to remind us of the origins and impacts of the war to end all war. Last fall a new feature length film version of the heart wrenching memoir, Testament of Youth was released theatrically in the UK. This weekend it finally made it to Boston. For those of us familiar with the work by the pacifist campaigner, Vera Brittain, the opening scenes of the idyll of the British countryside and the young people engaged in their last flirtation before the war fills one with dread. The film, as the book, pulls no punches in its depiction of the hubris of the British public thinking the war will be brief and impact less. 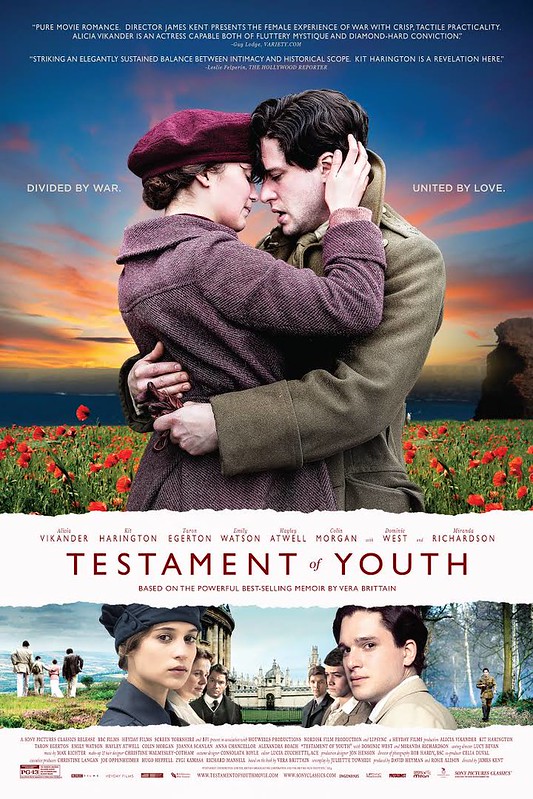 When I read that the filmmakers were redoing the story and eventually recast the lead to be Alicia Vikander I was a bit concerned. Could a young actress from Sweden capture the proper spirit of the strong headed woman who would make such a mark on generations to come? The 1933 book took on a renewed life in the late 1970's through an epic telling on the BBC with Cheryl Campbell as the lead. In the new film Vikander shows the talent that promises to make her a giant in international film. Given a spare script, she leaves no doubt on her angelic face of the range of emotions that young Vera experiences and she goes from rebellion to love to loss and then rebellion again.

She is paired with the equally beautiful Kit Harrington as her fiancé Roland Leighton. He, like her brother and their cohort of friends and school mates, march off to war with the care free bravado seen in other films of the era, Doctor Zhivago or Nicholas and Alexandra come to mind. They return in a way that killed that innocent Edwardian idyll and has left the world with a set of problems we have not transcended across the century. Vera loses all she cherishes on earth during the war but gains a self which the film allows us to glimpse. The text crawl at the end could not possibly do justice to the importance she had as a writer and graduate of Oxford who dedicated herself to trying to make the world a more peaceful place.

The story has haunted me for nearly forty years. Hopefully one hundreds years from now someone will write about how we have better learned the lessons she was trying to teach us. Not romance but practically that these foolish wars, which we still insist on fighting, makes us less safe and secure. And that their prosecution changes us and not for the better.

Posted with Blogsy
Posted by Ben at 10:17 AM