This week the Administration announced a change of rules which will significantly expand the eligibility of wage earners for overtime pay. This is the type of action that will help the economic fortunes of working families. This is the type of action that the President should concentrate on to secure his legacy. Peace and prosperity should be the watch words for the next 18 months.

With the unemployment rate falling but the workforce participation rate and median wages still stagnant, the long steady recovery from the crisis of 2007 to 2009 has only begun to reach into the homes of working families. With the refusal of Congress to take aggressive action to promote job creation it falls to the President to use his executive authority to move forward a family friendly economic policy. Oddly enough the President pushed hard for fast-track approval to further the trade agenda with the pacific rim. Actions that will lessen the wages and employment prospects of American workers. 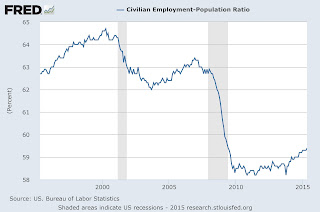 Important economic actions are outstanding ... the surface transportation bill has survived on short term renewals; the reauthorization of the Export-Import Bank languishes and we are about to go through another budget drama ... all of which contributes to economic instability at a time when the economy needs help to boost the fortunes of workers. The aggressive actions of the President will pay off with higher approval ratings. And with that perhaps he can drag Congress along in the right direction.
Posted by Ben at 8:47 AM