What the FED also did this week

Anyone staying on top of the news knows that the Federal Reserve finally gave the orders to raise interest rates above the zero level, an action long predicted by Fed watchers, bankers and economists. The headlines were about the increase in the target range for the Federal Funds Rate (the rate that banks charge one another for very short term lending) from 0 -.25 to .25 to .5 . While taking this action the Fed expressed optimism about the near term fortunes of the US economy and signaled a slow rise of rates at a pace of about a percent per year. But there were two other announcements in the technical note that should garner some attention. 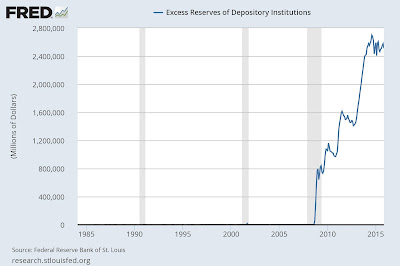 Other observers, such as Harold Meyerson in the Washington Post and Dean Baker of the CEPR have commented on the political and economic downside of the steps toward higher rates given the changes in US political economy that make one doubt that wage based inflation was anywhere ahead. Typically the Fed will bring the rates up based on concerns about price levels once the economy approaches full employment. The concern with the headline action is that we do not have that strong of a labor market and price inflation is historically low. For example, there is weak demand for commodities across the board keeping prices in check. Wages have seen tepid increases at best.

But hidden in the Fed's message (because the press never writes about this) is another action taken by the Fed to raise a key interest rate ... the interest paid on required and excess reserves. Banks are required to keep money on deposit to the Fed equal to about 10% of their deposits. That is money they are not allowed to lend or invest in another manner. It has to be there to take care of customer demand for their money. If banks get caught short they can temporarily borrow to get back in balance. But starting during the economic crises banks started to accumulate gigantic amounts of excess reserves and a change in law allowed the Fed to start paying interest on those reserves.

Today the amount of excess reserves stands at about $2.4 Trillion (yes with a T). This is a result of the Fed buying securities from the banks as part of its extraordinary measures to fight the crisis. Some of that are capital inflows into the US from foreign depositors as a result of the Euro crisis and instability in global equities and bonds (even negative rates some places). People like parking money in the US even though the return has been low. It is safe.

Since the Fed pays interest on these monies it is also a profit making center for the commercial banks that own these excess reserves. This week the Fed increased that rate to keep pace with the Fed Funds rate. At current levels this means an additional $5 to $6 billion per year in revenues to the banks. Money that might otherwise be returned to the taxpayers. Outside of being friendly to bankers (which sadly the Fed does too often) the technical reason is so that the mountain of reserves doesn't flow speedily into the real economy and spark inflation by a build up of money. The obvious question becomes is this going to continue as further interest rate increases occur? Is this their plan to wind down the positions in cash taken by the banks?