The Year in Film ... All Roads Cross in Ex-Machina 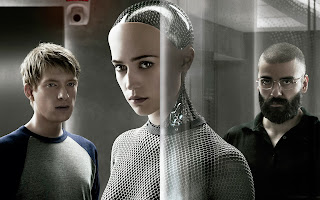 I suppose it should be no surprise that given previous posts about film ... that two of the three actors that made the year 2015 would be Alicia Vikander and Oscar Isaac. The third would be the Irish actor Domnhall Gleeson. Given that he is the son of the great Brendan Gleeson, it might not come as a huge upset that he is an accomplished actor but given this list of films in the past year ...

he has a resume in one year that most actors would be thrilled to have in a career. Typically cast as a sweet if somewhat goofy young man (see About Time) he was unrecognizable as the stern young General Hux in Star Wars. It bodes well for his future success.

The three wonderful young actors were cast together in what might prove to be the film of the year, Ex Machina. They have the three speaking roles (basically) in the story of a young man asked to spend a week evaluating the artificially intelligent life form (Vikander) at the behest of a dark tech mogul (Isaac) in a remote complex shut off from the world. (Nod to Sonaya Mizuno whose unspeaking character plays a major role as well.)

Isaac brought us through Show Me a Hero and for the third year in a row has a film that closes the year and is considered a must see triumph:

How many hearts swooned (among them several friends on Facebook apparently) at his portrayal of Poe in Star Wars? Any of us interested in politics, social justice and the challenges of urban America marveled at his work as the Mayor of Yonkers.

But 2015 was the year of Vikander. Something I tweeted about in the spring after watching her play Vera Brittain in Testament of Youth. Her year has been recognized in the press. Vogue and Vanity Fair among them. In US theaters this year ...

... plus smaller roles in lesser films. She has been nominated for two Golden Globes (Danish Girl and Ex Machina) which is remarkable because Testament (which was released in the UK in 2014) was a revelation. Somewhat ironically, there is an upcoming documentary about Ingrid Bergman which should bring forward some comparisons. I believe that we will see an amazing career unfold (perhaps the strongest by a woman since Streep?). Vikander brings an energy and character that belies her slight frame and easy beauty. Both Danish Girl and Testament open with long shots of her face. Smart, pained and lovely ... an elegance she can not shake. A future that is promising and broad and deep.