The Senate Foreign Relations Committee vote today (10-7) in favor of an amended resolution in favor of military action against Syria contained significant changes from the original draft. At the insistence of Sen McCain the resolution now includes language committing the US to changing the balance of power on the battlefield in Syria. The resolution now goes beyond what the President indicated as his goal, punishing Assad for the use of Chemical weapons. The process is now thoroughly confused as to the goal. 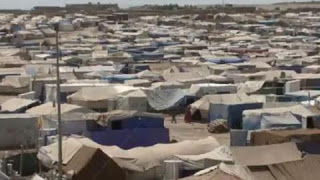 It didn't make much sense to me to have the US military kill people because Assad killed people. Now the goal of launching military force to bring Assad to the negotiating table with the rebels sounds like a significant escalation, even with the restriction of no US troops on the ground. Worse, it is a continuing line of thought that I have heard since Vietnam about the vain hope for a democratic element between bad choices at either end of the spectrum. Through military action we can encourage democratic elements that will (miracle of all miracles) come into line with US values and foreign policy objectives. If you buy that I have a unicorn to sell you.

In the mean time there are two million refugees from Syria that could use significant help. The situation is so bad people are leaving Syria to go to iraq.
Posted by Ben at 10:06 PM