Saying goodbye to my landlord's husband

The passing of Vaclav Havel silences an important voice for truth and morality in public life. The writing of Timothy Garton Ash, who watched the historic events of 1989 first hand with Havel, says it far more eloquently than I could ever hope to scribble:

Havel was a defining figure of late 20th-century Europe. He was not just a dissident; he was the epitome of the dissident, as we came to understand that novel term. He was not just the leader of a velvet revolution; he was the leader of the original velvet revolution, the one that gave us a label applied to many other non-violent mass protests since 1989.

Havel was one of many. The women and men who brought about the great peaceful change that swept across Europe and pushed aside the corrosive effects of communist dictatorship. Havel's genius was in defining for us what that era meant, or rather what living in that era cost those that needed to trade their humanity to avoid persecution. They lived the lie. This is how he described it in Living in Truth...


not on soldiers of its own, but on the soldiers of the enemy as it were—that is to say, on everyone who is living within the lie and who may be struck at any moment (in theory, at least) by the force of truth.

But in perpetuating the lie, we make the persecution real in society as a whole. A generation before Orwell saw and warned of the same thing. John Jay writes about his in his reflection on Havel in the FT.

The central figure of his famous dissident essay, The Power of the Powerless, was a greengrocer with a placard in his window saying: “Workers of the World Unite!” Havel asked an apparently simple question: what is the purpose of this display?

We might console ourselves that this sloganising is characteristic of their totalitarian societies, not our liberal democracies. But are we sure? Are corporate mission statements, or motivational displays in offices and factories, really spontaneous demonstrations of sincerely felt sentiments? Or do people say these things or hang them on the walls with the same indifferent resignation as the greengrocer? Is there much distinction between official exhortations to drive well, recycle conscientiously and to celebrate diversity, and official exhortations to redouble efforts to build a workers’ paradise? Would a visitor from Mars find it easy to distinguish commercial advertisements from political slogans? Is the capitalist assertion that the client always comes first more honest, or more informative, than the socialist proclamation of the unity of the workers of the world?


We face this issue constantly in American public life. When is a lie not a lie? Does it matter if the offense is related to health care for seniors? Or does it have to be a major issue like "voter fraud"? Havel would contend that you do not let the small issues become big ones. I have confidence that he would scoff at the contention of Politifact that you can call something Medicare and have it be that based on the title. War then becomes peace, if you declare it so. 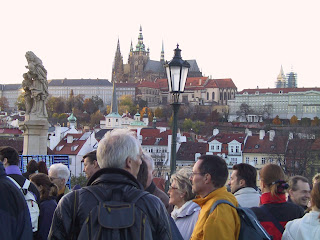 We can't let the reminders of the moral force of truth elude us because those who tried to promote truth are gone. Truth is not an easy pursuit. Even Havel missed it sometimes, joining others supporting the Bush Administration's reckless adventure in Iraq. He forgot that Central Europe has been a tool of the great powers. The lens of those who recruit you into war isn't concern for your people or truth, but rather there own policy and political ambitions.

The Czech's experienced this in the 20th Century. First it was the waning days of the Hapsburg domination. Then self-determination for a period (sort of, did Masaryk push too much into CZ?). Then the Nazis came and split the country into parts. The Soviets came and put it back but at a great expense forty years of persecution and stagnation.  Finally 1989, preceded by the heady days of 1968. Is it too much to hope that they have the peace and cooperation dreamed of for all of Europe? Yet, with the leadership of Merkel and Sarkozy and the indifference of Cameron; the European project is threatened in a way that will cause the smaller states to be exposed to economic and political danger. In Hungary we see that immediately, democracy is endangered by what could be a throwback to the bad old days of their interwar years. Where is the clear voice of European truth now? Who will pick up the mantle and speak for the powerless to prevent sliding back into the haze of authoritarianism?

I had the pleasure of renting an apartment from President Havel's widow. I still have the lease with the signature of Dagmar Havlova. It was a pleasant connection to my landlord and her husband. His writings live on and should be a welcome refuge to those who want reinforcement against the onslaught of lies in public life. We (in the US) are deep in an election year now and could use that type of clarity. Sometimes the rhetoric confuses us about the goal. It is Christmas, Hanukkah and the New Year. It is a time to focus on peace and self determination. We certainly deserve it.