Krugman, Okun and the Level of Unemployment

One of the concepts I stress to Macro students is "Okun's Law". Created by famed Brookings Institution economist Arthur Okun, the Law states simply that for each percentage above the natural rate of unemployment, the economy is losing 2% of potential output. So in round numbers, if the unemployment rate is 10% and the natural rate is 5% (both are probably lower right now, but the spread is the same...about 5%) then the economy is losing 10% of potential output. Roughly speaking then we have a recessionary GDP gap of 10%. In a 14 Trillion dollar economy that means we are down about $1.4 Trillion in output.

Paul Krugman blogged over the holiday about this point and illustrated his analysis with data from the Federal Reserve Bank of St. Louis. 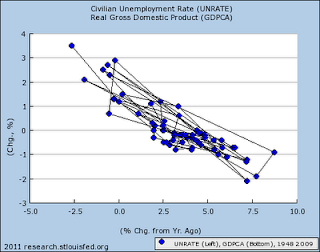 NY Times
The illustration shows that when economic growth is negative, unemployment shoots up. When economic growth is strong (in the neighborhood of 3.5 to 5% on an annual basis) then the unemployment rate will slowly reduce. My conclusion is that based on the low levels of growth projected in 2011 and without significant stimulus from government spending the unemployment rate will stay very high. The tiny stimulative effect of the tax changes signed into law could be overwhelmed by state and local cutbacks and federal reductions in spending. While cutbacks may make good political theatre, they endanger the tepid recovery from the very traumatic events of 2008 and the housing and financial bubbles.
Posted by Ben at 11:02 AM